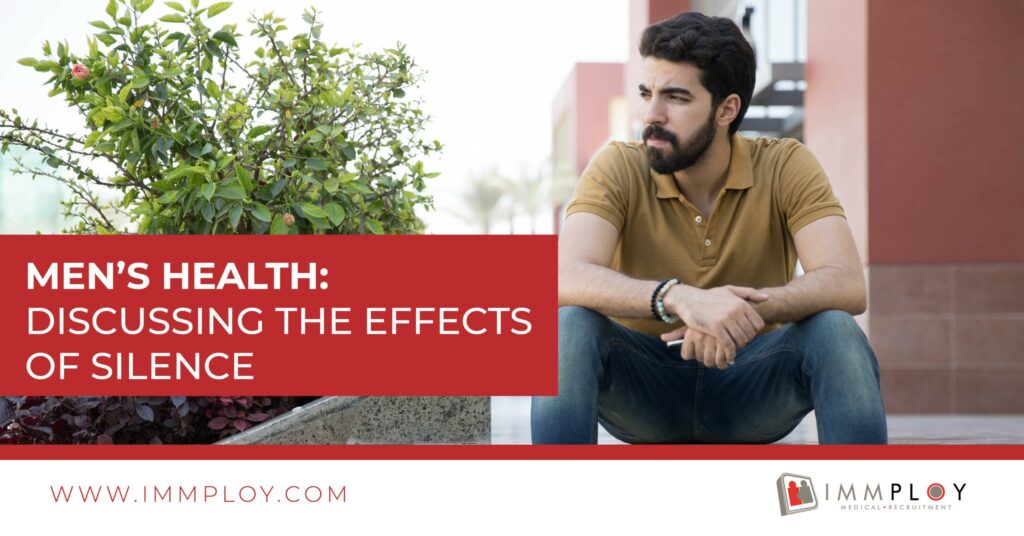 Immploy, August 2021: For many years, men’s health has been compromised. Due to their lack of vulnerability, and education, men are at more risk when it comes to their health. This issue is more habitual, from preconceived notions of masculinity to shame, and it prompts men to be silent about their medical needs. It is, therefore, necessary to debate some of the issues that have been consistent inhibitors of health amongst men. This article will examine some of the prevalent issues that prohibit men from seeking medical attention and how this affects them.

Commonly held beliefs by men about masculinity are frequently blamed for their negative attitudes. According to Helgeson et al. (1997: 251), gender scripts seem to promote disinterest in seeking healthcare. In a qualitative research project, Sharpe and Arnold (1998: 619) found that men consistently ignore health symptoms, and they explained that men’s tentative attitude results in delays between discovery and treatment. In this case, men’s attitudes towards health care seem to be inextricably tied to notions of masculinity. The habitual nature of masculinity continues to proliferate the idea that men are more potent than any physical inabilities.

In addition to a dismissive attitude, another aspect that negatively impacts men’s health is their destructive behaviour. According to Burns & Mahalik (2005: 251), gender scripts negatively affect many aspects of health and healthy behaviour, especially when it comes to risky behaviours such as excessive alcohol consumption, dangerous physical stunts, avoiding health care, participating in risky sexual behaviour, and resorting to physical fights. While considered ‘manly’, if left untreated, these behaviours increase men’s risk of developing severe health issues and, coupled with men’s reluctance to seek help from both friends and healthcare professionals, lead to more significant causes for concern. According to Seidler et al. (2016: 115), men seek help less than women do when it comes to mental challenges and substance abuse, leading to depressive symptoms like restlessness and irritability being viewed more commonly as signs of physical, not a mental illness.

The negative behaviours and attitudes mentioned above collectively contribute to men’s overall feelings of shame associated with their health. Rice et al. (2016: 157) observed that there was higher proneness to feelings of shame and depression among men, and these feelings were attributed to pressure men feel to uphold masculinity. Where females are accepted and expected to be emotional creatures, men, in contrast, are expected to be the exact opposite. Men are encouraged to be robust, composed and reliable at all times, even when they may internally feel the exact opposite. Any deviation from these characteristics diminishes their level of manliness. This masculine practice of being self-sufficient encourages feelings of shame and failure among those who fail to achieve this. As a result, many men struggle to open up or seek advice on how to handle these pressures from peers, partners and professionals.

What should men do?

A potential threat to men may be their silence. With current societal notions circulating in many families, men’s health is not prioritised. The lack of knowledge, vulnerability and confidence prohibit them from seeking health while affecting those around them. There is a crucial need to educate men on the effects of their health and a readjusting of traditional notions of masculinity and gender scripts. There is also a need for research efforts to develop empirically supported guidelines for interventions to improve men’s adjustment to treatments.