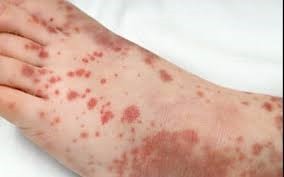 Immune thrombocytopenic purpura (ITP) is a clinical syndrome in which fewer circulating platelets (thrombocytopenia) (see the image below) manifests as a bleeding tendency, easy bruising (purpura), or extravasation of blood from capillaries into skin and mucous membranes (Kessler & Nagalla: 2019). Two distinct clinical syndromes manifest as an acute condition in children and a chronic condition in adults. The acute form often follows an infection and has a spontaneous resolution within two months. ITP is diagnosed by a low platelet count in a complete blood count (a common blood test). However, since the diagnosis depends on the exclusion of other causes of a low platelet count, additional investigations (such as a bone marrow biopsy) may be necessary to confirm if the symptoms are indicative of ITP. In mild cases, only careful observation may be required but very low counts or significant bleeding may prompt treatment with corticosteroids, intravenous immunoglobulin, anti-D immunoglobulin, or immunosuppressive medications. Refractory ITP (not responsive to conventional treatment) may require a splenectomy (the surgical removal of the spleen). Platelet transfusions may be used in severe bleeding and a very low count. Sometimes the body may compensate by making abnormally large platelets.

There are currently three classifications of ITP:

The two most common forms of treatment are steroids and intravenous gamma globulin.

Steroids help prevent bleeding by decreasing the rate of platelet destruction. Steroids, if effective, will result in an increase in platelet counts seen within two to three weeks. Side effects may include irritability, stomach irritation, weight gain, hypertension and acne.

Intravenous gamma globulin (IVGG) is a protein that contains many antibodies and slows the destruction of platelets. IVGG works quicker than steroids (within 24 to 48 hours).

Other Treatments for ITP

Other treatment options may include: