0
Congenital Cytomegalovirus Awareness Month
29 May 2020
Next Myasthenia gravis is a chronic autoimmune, neuromuscular disease that causes weakness in the skeletal muscles that worsens after periods of activity and improves after periods of rest. These muscles are responsible for functions involving breathing and moving parts of the body, including the arms and legs.

The condition is caused by a breakdown in communication between nerves and muscles. Symptoms include weakness in the arm and leg muscles, double vision and difficulties with speech and chewing. Medication, therapy and surgery can help.

According to the Myasthenia Gravis Foundation of America, MG is the most common primary disorder of neuromuscular transmission. It’s a relatively rare condition that affects between 14 and 20 out of every 100 000 people in the United States.

Previous research indicated that more than 85% of MG patients have antibodies to the acetylcholine receptor (AChR) at the neuromuscular junction or are seropositive for MG (SPMG).  It was also found that in the developed world the incidence of MG has increased, particularly amongst older individuals, but no epidemiological studies have been done on SPMG in Africa. Between 2003 and 2005 Bateman; Schinkel; Little; Liebenberg; Vincent, & Heckmann (S Afr Med J 2007; 97: 959-962) did a study to determine the annual incidence rate (IR) of SPMG in the Cape Town (CT) municipality, and the crude annual IR of SPMG for the whole of South Africa (SA).  They identified positive AChR antibody tests between 1 January 2003 and 1 January 2005 for patients living in CT, and the age- and sex-specific incidences were calculated. There were 65 positive assays in CT, and 230 nationwide. Based on these figures the annual IR for CT was 11.2 per million per year (95% confidence interval (CI) 8.7 – 14.3), and for South Africa 2.6 per million/year (95% CI 2.2 – 2.9).

The conclusion was that the annual IR of SPMG in CT is much the same as rates recorded recently in other developed countries, but the rest of SA has a much lower IR.  A preponderance of MG starting after the age of 50 years reflects a worldwide trend, although the CT data showed a relatively lower-than-expected incidence for older males. IRs for SPMG vary widely in different regions in SA; this is likely to be related to differences in regional healthcare delivery, and under-diagnosis.

Many people with MG are misdiagnosed for weeks, months or even many years. Often times it takes our disease progressing quite a bit and becoming quite severe for doctors to even think to consider testing for Myasthenia gravis. This is one of many reasons that we need increased awareness. Some individuals with MG have MG that only impacts their eye muscles – ocular MG. Most with ocular MG go on to develop generalised (body-wide) MG.

This can impact virtually any muscle in the body. It is common to have problems with vision, speech, chewing, swallowing, movement of the arms and legs, and breathing. Some individuals with MG have MG that only impacts their eye muscles.

This is called ocular MG. Most with ocular MG go on to develop generalised (body-wide) MG.
This can impact virtually any muscle in the body. It is common to have problems with vision, speech, chewing, swallowing, movement of the arms and legs, and breathing. 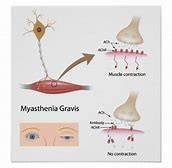 There is no cure for MG. The goal of treatment is to manage symptoms and control the activity of the immune system.

Corticosteroids and immunosuppressants can be used to suppress the immune system. These medications help minimise the abnormal immune response that occurs in MG. Additionally, cholinesterase inhibitors, such as pyridostigmine can be used to increase communication between nerves and muscles.

Removal of the thymus gland, which is part of the immune system, may be appropriate for many patients with MG. Once the thymus is removed, patients typically show less muscle weakness.

Plasmapheresis is also known as plasma exchange. This process removes harmful antibodies from the blood, which may result in an improvement in muscle strength.

There are some things you can do at home to help alleviate symptoms of MG: