Sub-Saharan Africa is experiencing a rapidly increasing burden of cancer-related morbidity and mortality. While annual deaths in the region resulting from human immunodeficiency virus (HIV), tuberculosis, and malaria are steadily declining, cancer deaths are projected to increase by 85% between 2008 and 2030. The sites of lip, oral cavity, nasopharynx, other pharynx, and larynx, collectively, comprised the sixth most common cancer in sub-Saharan Africa, with 18,099 reported cases in 2008 (Agency for Research on Cancer; 2010. [March 6, 2013]. Available from: http://globocan.iarc.fr). Worldwide, over 550,000 new cases of oral, head and neck cancer are diagnosed each year. (American Academy of Otolaryngology–Head and Neck Surgery Foundation). Salivary glands contain many different types of cells that can become cancerous, so there are many different types of salivary gland cancer. Head and neck are further categorised by the area of the head or neck in which they begin. These areas are described below and labelled in the image of head and neck cancer regions.

Areas That Can Be Affected

Head and neck cancers do not include cancers of the brain, eye, oesophagus, and thyroid gland, as well as those of the scalp, skin, muscles, and bones of the head and neck.
According to Professor Hille, Oral and Head & Neck Pathologist at the NHLS (Tygerberg Hospital) and honorary secretary of the South African Head & Neck Oncology Society (SAHNOS), there is a serious lack of awareness that HNCs are part of the leading cancers in incidence and cause of death and disability, in most parts of the world,

Despite the fact that smoking and tobacco use are still major risk factors, the fastest-growing segment of oral cancer patients is young, healthy, nonsmoking individuals due to the connection to the Human Papillomavirus (HPV). We cannot stop this virus from spreading; our only hope to save lives is with professional involvement and public awareness. This is your opportunity to get involved and give back to your community in hopes to raise oral cancer awareness and the need for early detection in order to save lives. Together, we have the opportunity to make a difference in the world of oral cancers. 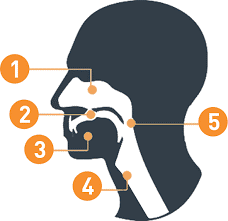 April is Oral Cancer Awareness month of the Oral Cancer Foundation (OCF) and we would like to invite you to join us in our national screening campaign to end oral cancer.

According to a study done by Faggons, Mabedi, Shores, and Gopal (Malawi Med J. 2015 Sep; 27(3): 79–87) the oropharyngeal/oral cavity was by far the most commonly reported site of head and neck squamous cell carcinoma HNSCC reported in sub-Saharan Africa. The roles of risk factors in (HNSCC) incidence in sub-Saharan Africa were difficult to delineate from the available studies, but a majority of patients did not use tobacco and alcohol.

Established risk factors for HNSCC in high-income countries include smoking, alcohol use, and older age. Overall, of the sub-Saharan HNSCC patients for whom environmental exposures were reported, more than half were non-smokers and denied alcohol use, implying a different set of risk factors compared to high-income countries. However, the data is difficult to analyse. Several studies noted the overall prevalence of tobacco and alcohol use amongst HNSCC cases, but very few reported the actual number of patients using these substances or the prevalence of tobacco and alcohol use in the general population. Some studies noted that social norms might prevent patients from openly reporting substance use, an inherent limitation of self-reported data. Clearer descriptions of anatomy and stage would lead to a better understanding of HNSCC in sub-Saharan Africa. In high-income countries, the incidence of HNSCC attributable to tobacco and alcohol is decreasing, while incidence of HPV-associated oropharyngeal squamous cell carcinoma (SCC) is increasing (McElrath K, Chitwood DD, Griffin DK, Comerford M. The consistency of self-reported HIV risk behaviour amongst injection drug users. Am J Public Health. 1994 Dec;84(12):1965–1970).